On Saturday 16th November Ethan Jones, Will Murray, Jay Cushen and Henry Oliver travelled down to the London Olympic Pool to race in the English Schools Relay National Finals for Sir John Deane's College in Northwich. They were up against Schools and Colleges from all over England and many of those were Swimming Colleges where they recruit from all over the country providing scholarships to the best swimmers. SJD college was made up of 4 Winsford Swimmers who have been trained, nurtured and developed over many years, so in other words our team who were representing SJD were competing completely organically. All 4 lads were as always in very determined mood to reach both finals and challenge for a podium place and so they went to work.
First race of the day for them was the senior 4x50 Medley Relay, the lads had an outstanding heat achieving a time of 1:51.02 qualifying them in 4th place for the final and real chance of a medal. After a break the lads went straight into the 4x50 medley relay final, all 4 lads had superb legs coming home in 1:52.92 slightly slower than the heat but good enough for 7th place in England, a great achievement from our Winsford Swimmers.
Next up was the senior boys 4x50 Free Relay again the lads were looking to maintain their great form and achieve a final placing, after 4 super strong and consistent legs the boys achieved a time of 1:44.61 which was good enough for 14th place,  narrowly missing out on the final but all the same a great swim mixing it up with the best Swimmers in England. A great experience for our Swimmers and I am sure many happy memories produced.
Well Done to Ethan Jones, Will Murray, Jay Cushen and Henry Oliver who represented Winsford Swim Team and Sir John Deane's College in London at the ESSA National Relays. A fantastic achievement to just qualify, but then to final and then to be so close to a podium placing only being beaten by swimming colleges made the achievement ever so sweeter. All 4 lads should be proud of their performance and proud that all have come through the ranks of Winsford Swim Team.
I am sure Ethan, Will, Jay and Henry along with many more of our Swimmers will be looking at National Qualification in 2020 for the various National competitions which take place in Spring and Summer.
Winsford Swim Team a conveyor belt of producing talent.
Dan 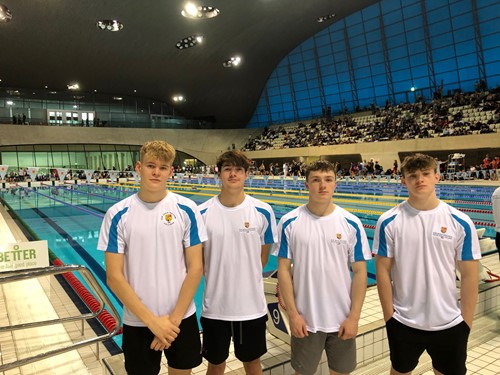 Everything you need to know about the galas we're attending